Poisonous Weeds That Might Be Growing In Your Yard

It goes without saying that any person foraging for edible plants, should know their poisonous plants as well. But, what about non-foragers? Even people who will never eat a wild plant in their lives should know which weeds may be toxic, especially PARENTS. Kids are curious by nature. Even if "foraging" isn't something you've taught them about, they will still have a tendency to explore the world around them using ALL of their senses. I remember doing some pretty strange things as a kid, including but not limited to, daring friends to eat bugs, tasting random plants and eating grass. I ran around with a bunch of boys, could you have guessed? All this is to say, it is not all that unlikely for a curious child to pick and eat or taste an unknown weed at some point. So parents listen up, here are some common poisonous weeds to put in your memory banks.

Some say this weed resembles purslane, an edible weed. In my opinion it would be pretty hard to mistake purslane for spurge. But, just in case here is a picture of the two together. Spurge on the top, purslane on the bottom. 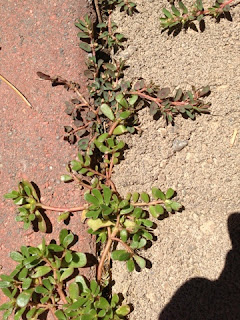 As you can see, similar structure but noticeably different. Spurge has a slightly hairy stem. Usually  mature plants of the spotted spurge variety will have a red tear shaped spot in the middle of each leaf. Also all members of the spurge family produce a milky white poisonous sap when the stems are broken. The main difference between these two is that purslane is a succulent and and spurge is not.
If ingested in even small quantities, spurge can cause violent vomiting and diarrhea. In larger quantities, it can cause death. 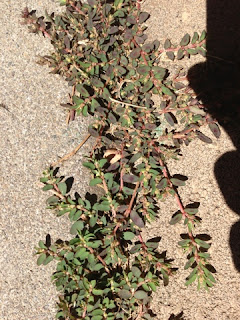 This plant is perhaps less toxic than the first, depending on who you talk to. There have been no known  human deaths, but there have been many reported cases of livestock fatalities. So, although there is no proof of its potential deadly affects on humans, I still think it's a good one to know and stay away from. Scarlet Pimpernel has been known to cause cases of dermatitis in some and stomach upset. It's not something I would want my kids to accidental munch on! Chickweed, an edible plant looks very similar and it's not uncommon to see the two plants growing together in clusters. So chickweed foragers beware! The main distinguishing factors are, the square hairless stem, opposite paired leaves that have reddish spots on the underneath side and orangey/red flowers about a quarter in diameter. It also grows in clusters, standing upright or can spread along the ground when there is only one plant in open space. 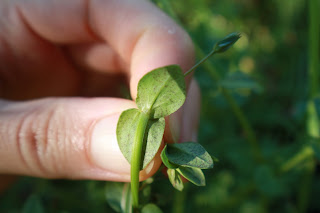 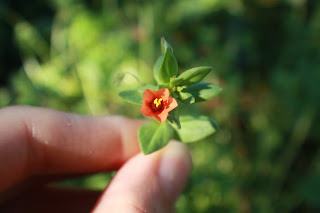 Last but certainly not least. Even small amounts can be deadly. Poison hemlock contains toxic alkaloids that when ingested, affect the central nervous system, causing symptoms ranging from vomiting to coma and death. Death usually occurs due to respiratory failure when the brain can no longer signal the lungs to breath. Below; on the top, leaf of a poison hemlock plant. On the bottom, leaf of a wild carrot plant. 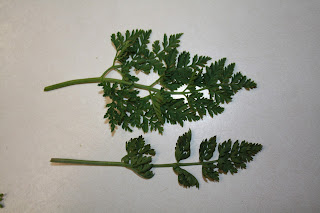 As you can see, unless you are a seasoned forager, it might be easy to mistake the two. The root of wild carrot is of course completely edible, while any part of poison hemlock can kill. Poison hemlock leaves are hairless and in maturity the stalks have purple splotches. Also the main stem is hollow. The leaves remind me of a fern, more lacy than the leaves of wild carrot. Wild carrot stems will be noticeably hairy, with no spots and solid throughout.

Below poison hemlock in flower. 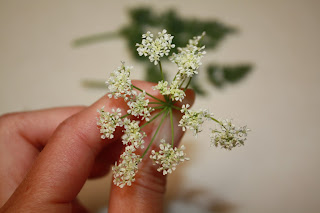 It is much easier to tell these plants apart once they have flowered. Poison hemlock has lacy looking flowers that tend to spread out vs wild carrot that stays more compact. Also you will notice the tiny dark purple spot in the middle of the wild carrot flower bellow, that does not appear on poison hemlock. Another distinguishing factor is the size of each plant. Poison hemlock will get between 3 and 8 feet tall while wild carrot will only grow to about 3 feet at the most. Also the root of wild carrot smells distinctly like, you guessed it, carrot. The root of poison hemlock will have a musty odor to it. So never eat a root you think to be wild carrot unless the root has a noticeable carroty smell, even if all other factors seem to match up!
Wild carrot in flower below. 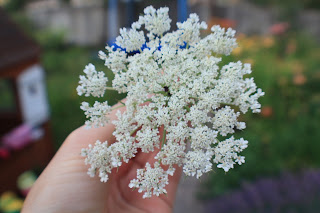 Commit these plants to memory until you feel confident you can identify them. I will be writing a follow up article on poisonous cultivated plants.

Caution: Never eat a wild plant that you can not positively identify with 100% certainty.